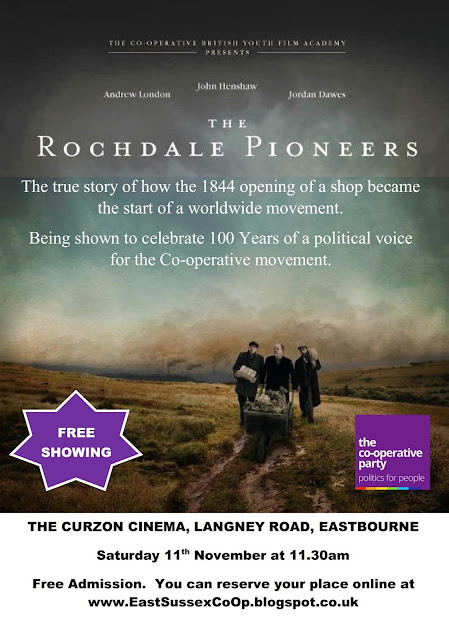 To celebrate 100 years of the Co-operative Party, the East Sussex Branch will be presenting a FREE showing of the film "The Rochdale Pioneers" on Saturday 11th November, at the Curzon Cinema at 11.30am.

William Cooper, his new wife Betty and best friend Samuel Ashworth are three young people fighting for their future. At a meeting in The Weavers' Arms, Cooper and Ashworth join the Rochdale Society of Equitable Pioneers.

The Rochdale Pioneers propose opening a shop that is run by co-operation; an endeavour that has the interests of the community at its heart. They forge a set of principles by which the business must be run.

Butterworth, a private shop owner, vehemently deters local wholesalers from trading with The Pioneers, threatening to sever business if they strike a deal. One such wholesaler, Leach, forms an allegiance with Butterworth in a bid to bring down the co-operative movement…