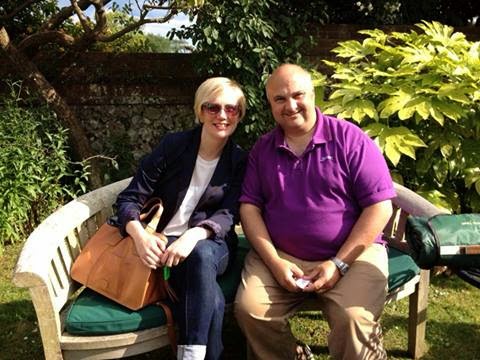 East Sussex Co-operative Party members enjoyed a great afternoon out at Eastbourne Labour Party-  of sunshine, good food, and an inspiring speech from one of Labour's best front-bench speakers, on Saturday 29th June.

Paul and Sarah Richards welcomed us to their garden (complete with rabbits, guinea pigs and ducks) for a splendid barbecue, with a super turnout from Labour members old and new, plus guests from Brighton and Hastings.

Stella Creasy, a Labour and Co-operative  MP (pictured with our host, Paul) was the guest speaker- she talked about her work in Parliament, including spearheading campaigns against payday lenders and legal loan-sharks, and inspired us about the need to campaign and fight to make a difference for ordinary people, even when constrained by being in opposition.   Stella also revealed that she had been invited, by Billy Bragg, to speak about her anti loan-shark campaigns at the Glastonbury Festival on the same day- but had turned him down as she'd accepted Eastbourne first. How's that for dedication ?